The Blood and Head of Medusa: Claiming Her For Your Very Own

Posted on December 1, 2018 by Nicole Morales

I’ve been seeing the reactions on social media of Medusa carrying the head of Perseus instead of the other way around.  It is an interesting role reversal but one that has no map beyond revenge or anger which can, for some, feel good.

I’m not disowning Perseus.  He was trying to save his mother.   He was sent to die and he didn’t.  In fact, I will even venture to say that the power of Medusa actually increased in her beheading rather than if she had remained caged in her broken temple by the sea.  Medusa and her snakes are calling to us and I see it in the social media.  Many hear and talk about these snakes daily.  We hear them when we are exposed to not just patriarchy but internalized hatred.  “You are not enough.”  “You aren’t worthy.”  “You are (fill in the blank).” 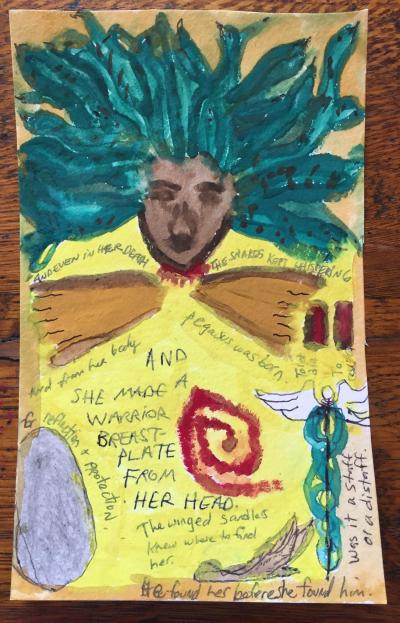 I think about her snakes whispering judgments in her ear about what had happened in that temple when she was raped by Poseidon.  How the whispers must have driven her mad as they were incessant.  Judgments and agreements that she lived with freezing any who laid eyes on her.  There she was in her temple by the sea with these statues frozen in various positions in horror and surprise and unknowing as they found themselves meeting that face of Medusa.

Just because Medusa was beheaded by a masculine figure, Perseus, doesn’t mean that it was a man who killed her.  In fact, she is part of the Goddess Athena in the same way that Erishkegal is Innanna.  She is the flip side of the coin that isn’t exposed and has remained hidden for survival.  She is the embodiment of not just an initial instance of the freeze part of fight, flight freeze response, but she continues to freeze all that come her way.  That moment of trauma continues to kill or freeze other versions of herself as her horror is still happening in the part of the brain that isn’t timestamped.  It is happening in the part of the “now” of the amygdala and hippocampus.  Medusa can be just one map along with many others for embodying our whole selves after trauma.

Can we venture to say that Medusa may have even been freed not for Perseus as a man but for the masculine to return to his mother and free that caring part of himself?  Let’s not get stuck in these old paradigms when we talk story metaphor.  Athena is us.  Perseus is us.  His mother is us.  The king is us.  Pegasus and Chryasaur are us.  Asclepius is us.  Hermes is us.  The frozen statues are us.  And that is how it is.  But there is movement in this story.   We don’t only occupy that broken temple by the sea freezing the unknowing souls again and again.

Perseus was sent on a losing venture by the king to get rid of Medusa.  We don’t really explore “why” beyond this need to send Perseus on a deadly quest.  But it is deeper than that.  If someone is stuck on gender and Perseus, maybe the dysfunctional or immature ego is sending him to kill the trauma that has deadly potential to be exposed.  In fact, maybe Medusa wandering these halls listening to these snakes is getting in the way of our self mothering, holding ourselves hostage.  It is getting in the way of that mother being free instead of imprisoned or consumed or used or owned.  Power is brewing in that broken temple.

Perseus is smart in following the way of the heroic journey.  He consciously prepares.  He asks for help.  He goes to Hermes as he is The Guide of the Underworld  (not just the Messenger God).  Hermes knows what that underworld can look like as he has guided many to that realm. He has been down there and walked with them.  He has walked that path with his winged shoes the soul applied to the ground.  That soul of his winged sandals have a memory and know where to find the underworld.  They will help track down Medusa.  He is also given the sword to cut off the head of Medusa.  It was given to behead and separate the head from the body in its current form.

After he sees Hermes, he goes to the Goddess of Wisdom, Athena.  She gives directions to use a shield for protection and reflection.  Let’s not look it in the eye when we are still so damaged.  In fact, we may even be damaged by something that has yet to occur.  Let’s use this shield and we can see her.  Expose what she looks like.  We can track her down and find the opportunity to cut off its head.  Yes, she tells him, track it down, reflect, behead, but bring me back her blood.  I want her blood.  Bring me back her head.  I want the head of Medusa.  She then hands him the 2 empty vials for her blood and the sack in which the head can be returned.  But what she wants to do with the blood and head is the aperture story. It is a map in which our individual details towards healing must still be fleshed out.  As Clarissa Estes says, “Aperature stories allow us to glimpse their hidden healing structures and deeper meaning, rather than just their overt contents.”

And remember, don’t directly look at her.  Remember.  We have to time stamp her.  We have to know her and ourselves in a different way to be able to harness the power.  Yes, wounds are doorways.

Perseus flies and tracks her down.  He uses all of his senses.  If you are listening, you’ll hear her.  You just have to be careful not to get hooked.  See those snakes talk.  Whisper.  Tell stories about not being good enough.  Being damaged.  Being fucked up.  Those snakes can be incessant and nasty and don’t care how many statues are caught off guard and are led to their death.  They just keep whispering in Medusa’s ear which she must have felt as if she was crazy from those inner voices and judgments alone.

Perseus kills her.  He lops off her head with the sword severing her head and her body.  I’m sure that struggle looks so many different ways.  There may be some nearly headless Medusa’s still moving about the temple.  Some it is a clean swipe.  Others may have a hard time swinging at all wondering if this is what they really want and that maybe looking at her could be a preferred death for that moment.

Perseus reflects her image and beheads her.  From her body is born the beauty of Pegasus and Chryasaur.  The beauty and mighty animals that fly from her that have been trapped and growing are released.  They go on and have lives of their own.

And then, Perseus does as he was told to do.  He takes that head of Medusa and sticks it in a sack.  Of course, he can still hear the snakes whispering even through the bag but it can no longer freeze him.  He can now identify the words and the power those words might have.  Then, he takes the empty vials that Athena has given him for medicine.  He takes blood from the left side of her body and fills a vial.  I’m imagining this process isn’t exactly easy but quite messy.  This vial of blood from the left side of the body has the power to kill and let die what needs to die.  Then he takes the other vial and fills up her blood in the other vial from the right side of her body.  This blood has the power to heal and resurrect.  The body may be stricken down but the medicine and the head of Medusa are still to be used and is still essential.

Perseus goes through a bunch of other trials and tribulations between now and returning to the king’s court.  But when he returns he brings the bag with Medusa’s head inside of it.  The king, of course, doesn’t believe the quest has been fulfilled and Perseus frees his mother by presenting her head to the King and his court leaving them frozen in time and irrelevant but in a past story.   But then, he also has to complete his tasks by returning that which he has borrowed and been given.  He returns the sandals and sword to Hermes and returns the head and vials of blood to Athena.

Athena, in turn, takes the vials to the Demigod Asclepius.  You might know Asclepius from the snakes in the physician’s staff.  Maybe the morphing of the symbol to two snakes wasn’t a mistake by someone after all.  Maybe they knew this history.  The single snake surrounding a staff is the physician’s staff.  Asclepius was a physician who worked on the battlefield.  Many of us have battlefields of our own where medicine can be used, even the medicine from the body of our Medusa.  Goddess Athena gave these vials to him and this is where he was able to help decide and sort what needed to be healed and let live and what needed to die or be laid to rest.  This is the kind of conscious and unconscious sorting we can do in life.  We sort one from the other on our battlefield.

And then the Goddess Athena, remember she was not just the Goddess of Wisdom but the Goddess of War and Heraldry, took the head of Medusa and mounted it on her warrior breastplate.  I remember when learning about these Gods and Goddesses in seventh grade and not really fully understanding how they could have multiple titles.  I really didn’t understand how someone could be the “Goddess of Wisdom” and the “Goddess of War” as they were opposites, right?  Of course, time allows us to grow and see things differently. This is from a child’s eyes as we know that we all have battlefields of sorts in our lives.  We have battlefields in our own psyches.  Navigating these can sure take some wisdom.  In any case, Athena takes the head of Medusa and mounts it on her chest before riding into battle.

The Greeks emblazoned the head of Medusa on their shields.  The very thing that struck fear and initiated the sympathetic nervous system to freeze was used as the most powerful symbol of what we rode into battles with.  This is powerful.  The head of Medusa, snakes and all, the judgments and agreements that once kept us down and confined to a broken temple is the thing that gives us the strength to move forward.  Blamm!!!  Just like that, we ride.  This is our hero’s journey.  Not the result of the battle, but the full out protection of our heart by the thing that once got caught in our bodies to prevent our death.   We mount that on our warrior breastplate.  It wasn’t easy in that it existed at all.  It was an immense feat to prepare, track, and sever it as the snakes continue to speak and whisper and distract.  It is ours for riding into battle a battlefield where things that must be laid to rest and poisoned and killed are alongside what is to be healed and resurrected.  It is ours to ride into battle with Medusa’s head so that we can fully live.  The blood and head of Medusa, we can claim them for our very own.

Category: birth from within blog